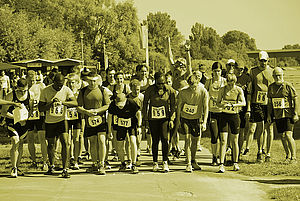 The history of our association goes back about the year 2004...

Due to the steady rise in the number of Cameroonians living in Germersheim, Marie-Florence Fouda had this brilliant idea of founding an association, which will bring together expats from Cameroon so as to maintain and promote brotherhood deeply embedded in every Cameroonian community. The main thrust of this initiative, backed by Joyce Noufele, brought into being the CCG in March 2004.

At the very beginning, Cameroonians as well as friends welcomed this idea with great enthusiasm, which in fact only went a long way to confirm the need of such a social network amongst Cameroonians in the Diaspora.

CCG activities not only included cross-cultural interchanges but also and above all, mutual assistance amongst the group members, values advocated by the pioneers.

The CCG experienced a journey full of ups and downs during which the course of its destiny was still to be clearly defined. Edouard Okala (the first ever president), Alain Djossa and Nathalie Iyabi were more than determined to instil some changes in the association. Committed members like Yvette Nguele steered the association in the direction of legalisation. This move was backed up by Elvis Tchapchet, Nathalie Iyabi, David Ngolle, not forgetting to mention other association members whose names we are not going to list down. This was the first step towards a long journey, which finally led to a triumphant outcome in May 2008.

The CCG e.V saga continued with the former executive office under the leadership of the dynamic president William Sandjoh who brought a fresh whiff of life in the association.

We hope that CCG e.V. will continue to thrive and that the solid foundations laid down through the pugnacity of the aforementioned names would serve as a role model for the future generation.

Thank you for visiting our site and taking part in our activities.