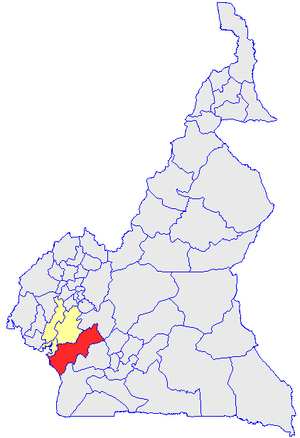 The Basso’o village is situated along the Sanaga River, in the Department of Sanaga-Maritime. The natives of Basso´o are part of the Mpo’o Family who principally lives in the Littoral Province.

Like every modern society, the Basso’o society has a well defined structure:

The Chief of the village

His main role is to liaise between the administration and the villagers. It is not his task to solve problems between villagers.

They are the custom keepers and work together with the Chief of the village. They have great authority because they are the ones who are in charge of solving problems between villagers.

The Basso’o language is a mixture of Bassa, Ewondo and Duálá (Languages of the Littoral). Moreover, Basso’o people speak the two official languages of Cameroon: English and French.

Basso’o customs, as those of other Cameroonian tribes, vary from ceremony to ceremony. The four scarifications on a boy’s chest are the most popular ones. They represent the transition from adolescence to manhood and serve as protection against any form of attack. Boys can only be scarified when there is a special ceremony, such as the enthronement of the Chief of a village.
Another Basso’o custom is observed during widowhood. During a certain period after her husband’s funeral, the widow has to be dressed in blue.

In order to marry a Basso’o girl, the suitor has to formally ask her parents for her hand. The bride price can then only be paid after the family head’s approval. The wedding in Cameroon is a very big family celebration stretching over days.